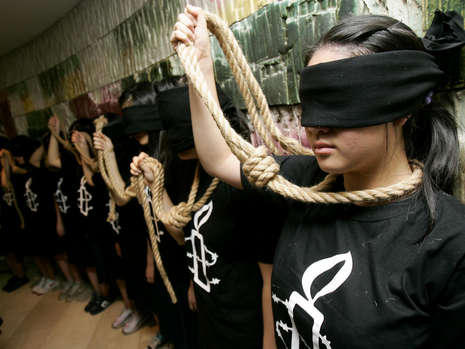 According to Amnesty International’s documentation, two of the 81 men who were executed on Saturday had been sentenced to death after being convicted of crimes related to their participation in violent anti-government protests. The number of individuals executed for similar charges could be higher.

The Specialized Criminal Court (SCC) sentenced Mohammad al-Shakhouri to death on 21 February 2021 for alleged violent offences related to his participation in anti-government protests. He had no access to legal representation during his detention and interrogation and his family was only allowed to visit eight months after his arrest.

Al-Shakhouri told the court he suffered bruising and severe pain in his back, ribs and mouth after being tortured. He lost most of his teeth after security officers repeatedly punched him in the face, yet he was denied medical care. Al-Shakouri withdrew his „confession“ as it was extracted through torture, so the judge handed down a discretionary death sentence.

In another case, As’ad Ali, also executed on Saturday, had been sentenced to death by the SCC on 30 January 2021 for similar offences. He told the court he had suffered physical and emotional torture while being interrogated in solitary confinement and that his „confession“ had also been extracted through torture. Ali said he was denied medical treatment despite suffering from acute pain.

Saudi Arabia has previously carried out two mass executions in recent years, though neither of them on the same scale: In 2019, 37 people were executed, the majority of whom were Shi’a men convicted after sham trials; in 2016, 47 people were executed including prominent Shi’a cleric Sheikh Nimr al-Nimr.

Amnesty International has documented the cases of at least 30 further individuals at risk of execution after being sentenced to death after unfair trials on wide-ranging charges arising from their opposition to the government or participation in anti-state protests, drug smuggling, violent attacks or murder. The total number of individuals sentenced to death on similar charges is likely much higher.

In all cases documented by Amnesty International, individuals were sentenced following grossly unfair trials, many of which were marred by claims of torture during detention, which the prosecution failed to investigate in violation of Saudi Arabia’s international obligations.

In March 2022, Abdullah al-Huwaiti, a young man who was 14 at the time of his alleged crime, was sentenced to death following a re-trial, after his initial death sentence was overturned in November 2021. He was re-sentenced to death for charges of murder and armed robbery. According to court documents, he was detained in solitary confinement for four months throughout his interrogation, which was carried out without the presence of his parents or lawyer.

At the end of March 2022, Saudi Arabian academic Hassan al-Maliki is scheduled to appear before the SCC, in a resumption of his trial where he could face a death sentence on charges relating to his freedom of expression. The 14 charges include „insulting the rulers and council of senior scholars of this country“; „conducting media interviews with Western newspapers and channels that are hostile [to the Kingdom]“; „authoring a number of books and research papers … and publishing them outside of the Kingdom“ and „possessing 348 books that are unauthorized by the competent authority“.

In a similar case, religious cleric Salman Alodah faces the death penalty also before the SCC for charges related to his alleged support for imprisoned dissidents and the Muslim Brotherhood, a banned political group. Alodah was held in solitary confinement for the first five months of his detention, in breach of international standards such as the Nelson Mandela Rules, with no contact allowed with his family or a lawyer apart from one brief call a month after his arrest.

In August 2018, Salman Alodah was brought to trial before the SCC in a secret session, where he was charged on 37 counts, including calling for freedom of expression and political reforms in Saudi Arabia. In May 2019, after another secret hearing, his lawyer informed his family that the prosecutor had sought the death penalty. He remains on trial awaiting a verdict.

„Hassan al-Maliki and Salman Alodah should be immediately and unconditionally released. Nobody should face a death sentence simply for practicing their right to free speech. The state’s use of executions as a political tool to stifle critics is a rampant miscarriage of justice,“ said Lynn Maalouf.

A Royal Order issued in 2020 announced an end to the use of the death penalty against people below the age of 18 at the time of the crime, and only in discretionary cases not involving the counter-terror law. It did not specify if the announcement extended to minors sentenced for hadd crimes (those with fixed and severe punishments under Shari’a) or crimes punishable by qisas (retaliation). The Royal Order falls short of Saudi Arabia’s obligations under the Convention on the Rights of the Child.

In early 2021, the Saudi Arabian authorities announced changes in relation to the death penalty, including a moratorium on executions for drug-related crimes, which are death sentences handed down at the judge’s discretion rather than mandated under Sharia law. While this moratorium appears to have been implemented, it has yet to be formalized and remains unofficial as long as existing narcotics laws carry the death penalty and individuals previously sentenced to death for drug-related crimes remain on death row.

Moreover, courts continued to hand down and execute individuals for other crimes where judges can issue a death sentence at their discretion. Ja’far Sultan and Sadiq Thamer, both Bahraini citizens, were handed discretionary death sentences on 7 October 2021 over „terrorism“-related charges, including the smuggling of explosives, receiving military training in Iran, and „participating in protests in Bahrain that called for the government to be overthrown.“ Their conviction was upheld by the Appeals Court in January 2022 but could still be overturned by the Supreme Court.

The death penalty is the ultimate cruel, inhuman and degrading punishment, and a violation of the right to life. Amnesty International calls on the Saudi Arabian authorities to put an immediate halt to executions, establish an official moratorium on all executions and initiate legislation that would totally abolish the death penalty for all crimes.

Saudi Arabia must also ensure that no „confessions“ or other statements obtained through torture or other ill-treatment are admitted by courts, and all complaints of abuse are promptly and efficiently investigated by an independent body.